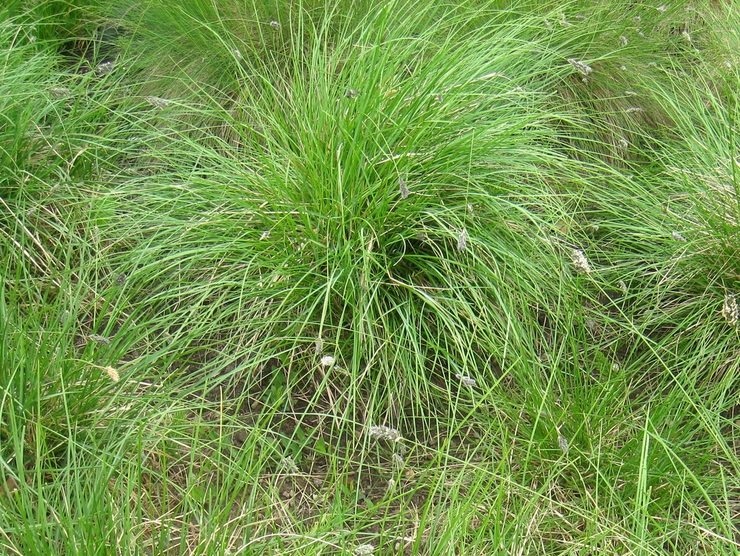 This compact blue green foliaged Sesleria is native to northern Europe and the British Isles. Well behaved, Sesleria caerulea is a compact grower with 6-8" leaves that are chalky blue on the top and dark green on the undersides, giving the foliage a distinctly two-toned look. Like Sesleria heuf, spring flowers in April and May are noticeable at first but become inconspicuous with age. Sesleria caerulea does not like hot inland climates and is not as hear tolerant as other Sesleria's. Sesleria caerulea grows in a wide variety of soils but prefers a well-drained loam. It will tolerate a wide variety of conditions.

Uses:
Sesleria caerulea is useful as single specimens in small gardens and perennial borders or in groups and masses in larger gardens. It is a dependable large scale ground cover grass.
Watering:
Sesleria caerulea needs more water than most Sesleria's. It is best with regular water and does not like to dry out. Sesleria caerulea grows best in full sun, but looks better with some shade in the hottest part of the day, especially in hotter inland valleys.

Planting/Spacing:
Plant Sesleria caerulea 12-18" on-center depending on the desired effect and the addition of bulbs and flowering accents. It is best planted in fall or spring from plugs or pots but it can be planted any time of the year in all but the coldest climates as long as moisture is sufficient.
Desert Conditions:
Not recommended.
Coastal:
Sesleria caerulea is good by coast and is perfectly at home with 2nd exposure seacoast conditions.
Slopes:
Sesleria caerulea is not recommended for seep slopes, Gentle coast slopes are fine as long as moisture is adequate.
Watering:
Sesleria caerulea grows best with regular water and will not tolerate extended period of heat and drought. Drought tolerate in coastal settings, plantings in hotter inland valleys will need more water to look good in the hot summer months.
Diseases and pests: None!
Maintenance:
A very low maintenance grass, Sesleria caerulea looks great year round. It does best, however, with a light trimming in fall or early spring to promote new growth. Sesleria caerulea can be trimmed any time of year if foliage needs refreshing.
Alpine: Good to 8000'